In Early 2018 we collaborated with Small Press Traffic to host SMALL TIME. Over 2 months we hosted 14 writers and their collaborators in Point Arena for residencies. During their stay, we asked participants to question what constitutes creative space and creative community while fomenting their own writing. Below are the residents accepted to our first Small Time season, you can read their full bios here.


More about Small Press Traffic and the residency at: smallpresstraffic.org

Lewis is a professional financial planer based in Austin, Texas. During his month-long residency he offered his services and experience pro-bono to members of the Point Arena local community, as well as to any past residents from our TWTT network. He also planted over 200 redwood trees as a contribution to our in-progress community forest.

During their residency, Andrea, Annie, Rose, and Tim estalblished a new project: The Center for Hydrosocial Studies.
In their words: The Center for Hydrosocial Studies is a living archive concerned with the connection between water and people. We observe the capacity of water to consolidate and erode power. We are interested in the collection, measurement, distribution, conservation, and use of water, as well as techniques of introspection, intervention, intuition, imagination, and the impossible.

Park Hyun Gi is a Korean American artist born in Bryan, TX and obtained her BFA in Sculpture + Extended Media at Virginia Commonwealth University. Park creates fictionalized rituals by incorporating both Eastern and Western, as well as modern and traditional elements in her performances. At TWTT, Park continued her current research on the impacts of Korean Shamanism in the modern day capitalist Korea and the structures of a ritual. Utilizing incense in her performances as a measurement of time, cleansing of a space, and the exhaustion of pain by burning it on her flesh, Park has been creating her own incense out of different herbs and her spit and hair.

BlinkPopShift (aka M Eifler) makes chimeras, things in between things. Liminal things. Between objects and places, between physical and virtual, between art and technology. During their time at This Will Take Time they focused on drawing with an augmented reality headset. AR is an extremely ephemeral material as the drawings themselves can't be saved so only image and video documentation of the drawings survive.

In November 2017, MacEwan dug an impact crater into the earth, using only hand-tools, every day, for the duration of one lunar cycle. MacEwan gave live transmissions each morning as the Human Meteorite, from via social media to a globally scattered audience, from their remote location in California. These intimate transmissions contained reflections on the physical, emotional and spiritual experiences of the Human Meteorite, and gave a window into the performance as it progressed. Visit @human_meteorite to see how things unfolded.

Kyle and Brontë worked on research and planning for "Lead to Life: A People's Alchemy for Regeneration." In their words:

Following in the footsteps of Dr. King's dream to turn Swords into Plowshares, our intention through Lead to Life is to transform that which kills into that which makes life - both our materials & our imaginations. We are transforming weapons into shovels for ceremonial-tree plantings at sites that have been both impacted by violence and carry spiritual significance across Atlanta and Oakland.

Angus McCullough is thinker and maker, working with sculpture, video, writing, drawing and improvised music. He studied architecture and Chinese philosophy at Wesleyan University, and his projects focus on the structures of time, linguistics, intuition, and dreaming, among other zones. His work has been shown in the US and Europe.

Angus drove out to Point Arena from Vermont, and continued a long project of understanding time - it's construction, perception and slippages - manifested through writing, video work and events. He installed a long term erosion experiment on the property. Using two 1-ton boulders and small water droppers, these two "clocks" will mark the sustained activity of TWTT through erosion. The length of the piece is indeterminate, and the outcome is unknown. He also began working on an invisibility cloak and performed a burial of broken parts from his car, among other things.

Gabriel Christian is a performance artist, teacher, and curator from New York City and based in Oakland. Gabriel's work bridges humor, drag, movement art, poetry, and stage technique, and his research often forefronts the legacies and futurities of black resilience, gender fluidity, and queer resistance.

At TWTT, Gabriel followed up on his project Black Presence. Initiated during February in resistance to the historicizing and scopophilic lens of Black History Month, Black Presence is a durational exploration composed of repeated spontaneous collaborations between Gabriel and a collection of brown and black artists.

Through August, Gabriel brought seven artists from or based in the Bay Area to work, thrive, and live intently at the TWTT cabin with him, and video-chatted with countless more. These were all continuations of the work began in February, at or around the exact six-month mark of each initial collaboration.

In between collaborations, Gabriel also spent ample time wandering, pulling kale, and hauling around a Bluetooth speaker and Ben's camera around Point Arena to film black joy through movement.

Past and future work can be found at: blackpresence.xyz

Ava Rosen and Alexandra Williams are collaborators and co-founders of Open Windows Cooperative, a print shop, bindery and community art space in San Francisco. Integral to our work is collaboration with each other and with nature.

At TWTT Ava and Alexandra explored hand papermaking as a way to engage with the local landscape and community. They facilitated papermaking workshops at Windy Hollow Farm Camp, met local papermakers, artists, community members, and explored the coast, all of which contributed to their larger project.

What started as experimental papermaking became 3 sculptures, a video, and a series of still images that will be compiled into a zine. All aspects of production, from paper to photographic image to performance to video, are parts of a larger transformation - a process wheel that emerges from a mixture of intention and chance. They embraced labor as a way to immerse themselves in the landscape and, through that process, transformed both material and self.

Ellie Lobovits is a filmmaker, curator, and cultural observer. Her work is one part art, one part social activism, one part cultural theory, and a million parts hybrid. Ellie's research, writing, and filmmaking focuses on land, the body, and feminist stories. Ellie holds an MA in Visual Anthropology from San Francisco State University.

While at TWTT, Ellie began post-production on her documentary film, Birth on the Border, which profiles two Mexican women who cross legally into the U.S. to give birth, and two Mexican-American midwives. The film explores border-crossing, harassment at the hands of border patrol officers, and what it means to live in the borderlands.

At TWTT, Ellie also discussed kale harvesting with Ben, the lives of high school students with Tara, paper-making with Alex and Ava, and wandered in the foggy fields.

Kiyan Williams is a multidisciplinary artist. At TWTT Kiyan created earth sculptures, portraits, and performance videos inspired by the shapes and color palette of the Pacific Coast along the Stornetta Public Lands.

David and Johan set up their hardware synthesizers and drum machines in TWTT's woodshop for a 4-day musical retreat to record their second EP, following their debut released in January 2017. Inspired by the rainy atmosphere, they put together a little more than 20 minutes of material that they hope to release by the end of June 2017."

Night Sea Project on Facebook, and listen on Bandcamp

Joty Dhaliwal is an artist by nature, a philosopher by formal education, and a spatial designer and builder by profession. Based in the San Francisco Bay Area, she uses various mediums to explore topics of the mind and body, consciousness as awareness, and sound.

At TWTT, Joty created a multi-media “dance class” installation, involving narration, guided visualization, and an accompanying video and soundscape. The narration is based on metaphors of the natural world, encouraging participants to use their bodies to visualize the prompts, while the projections and sounds concurrently guide the imagination.

Two amateur wildlife cryptologists demonstrate how to use their whale song encryption protocol to send transpacific messages as an alternative to email. 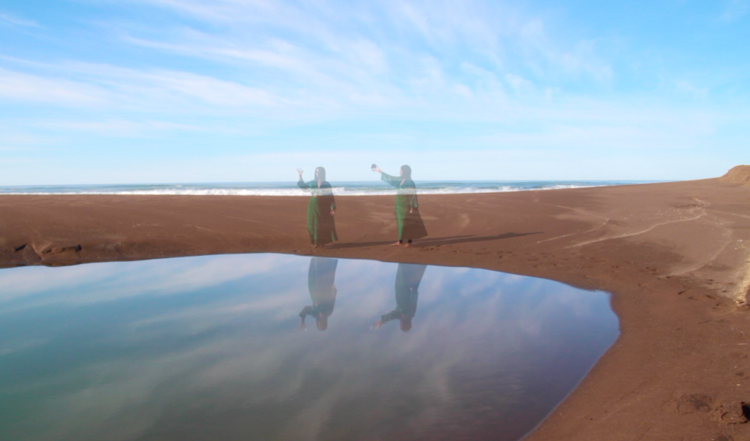 Yetunde Olagbaju is a multidisciplinary artist and collaborator currently residing in Oakland, CA. Through her work she concerns herself with time travel, space, source, vulnerability, ancestry, and her own relationship to the blackness of the universe. By utilizing various mediums she aims to illuminate paths of deep emotional kinship and cosmic mirroring within human connection and identity. This is all with the desire to bridge the past with the present-future.

While in residence, Yetunde worked on scroll-paintings, experimented with soundscapes, and mainly produced the video work i gave myself time to go back...pt. II

“
past, present, and future selves
on earth in the same breath
can we communicate?
can we articulate?
can we orbit in a loving way?
”

Emma and Matt were our first permaculturalists-in-residence! During their 3 month stay, the duo worked on a breadth of homesteading projects, building screech owl boxes, a solar dehydrator and raised beds for perennial greens. Continung their practice of shiitake mushroom cultivation, Emma and Matt also built a mycellial structure of felled Eukalyptus that will continue to produce edible mushrooms for years to come.

Liat and Leora were in residence at Point Arena collaborating on rituals and instructions for living under and adjacent to capitalism. While parts of this project have taken on written and booklet form, they have now launched a social practice / in-person arm of this project -- dinner parties!

Over a 5 week residency, Alex expanded her Positions and Situations project to the Mendocino and Northern California coast. She mailed over 100 letters responding to personal ads from the Back-to-the-land movement of the 70's and 80's, archiving the stories she received in a growing compendium of letters and forth-coming publication.

Annie hand-made thousands of bricks from locally excavated dirt to construct a temporary wall, a barrier that would erode slowly with climate and in time. Her project at TWTT was an extension of her studio practice, where she has been producing bricks following ancient Egyptian traditions for years. As her first outdoor installation, // Bauen // In lying next to you // connects to Point Arena's vast landscape and prolonged rhythms, becoming a site of stillness and point of reflection towards larger cultural paces and change on a global scale.

This project will ultimately come together in a video, book/print series beyond the physical, ever-evolving installation.

Liat Berdugo and Emily Martinez were in residence working on their collaborative project: How to Make Yourself Into a Commissioning Body in Five Easy Steps. Their meditations on the so-called "sharing economy" and the contemporary artist's "anxiety to make" took form as a series of video commissions, downloads, generators and a workshop at Transmediale in Berlin last month.

Rico and Shino are a NYC-based journalist and photographer collaborative duo. Their project You belong to the City documents the changing neighborhoods of San Francisco and address sociopolitical tensions resulting from shifting demographics and economic development.

Through the Point Arena Technology Center, Ingrid and Surya ran a 3-day workshop teaching local youth about network infrastructure. During the workshop participants learned how to identify network infrastructure in the world around them using Point Arena’s many cable markings, utility flags, and microwave towers. The workshop was a prototype in developing a "Network Geography 101" teaching curriculum.

Ingrid also wrote about network geography and infrastructure in Point Arena for the Atlantic → Where the Cloud Rises From the Sea.